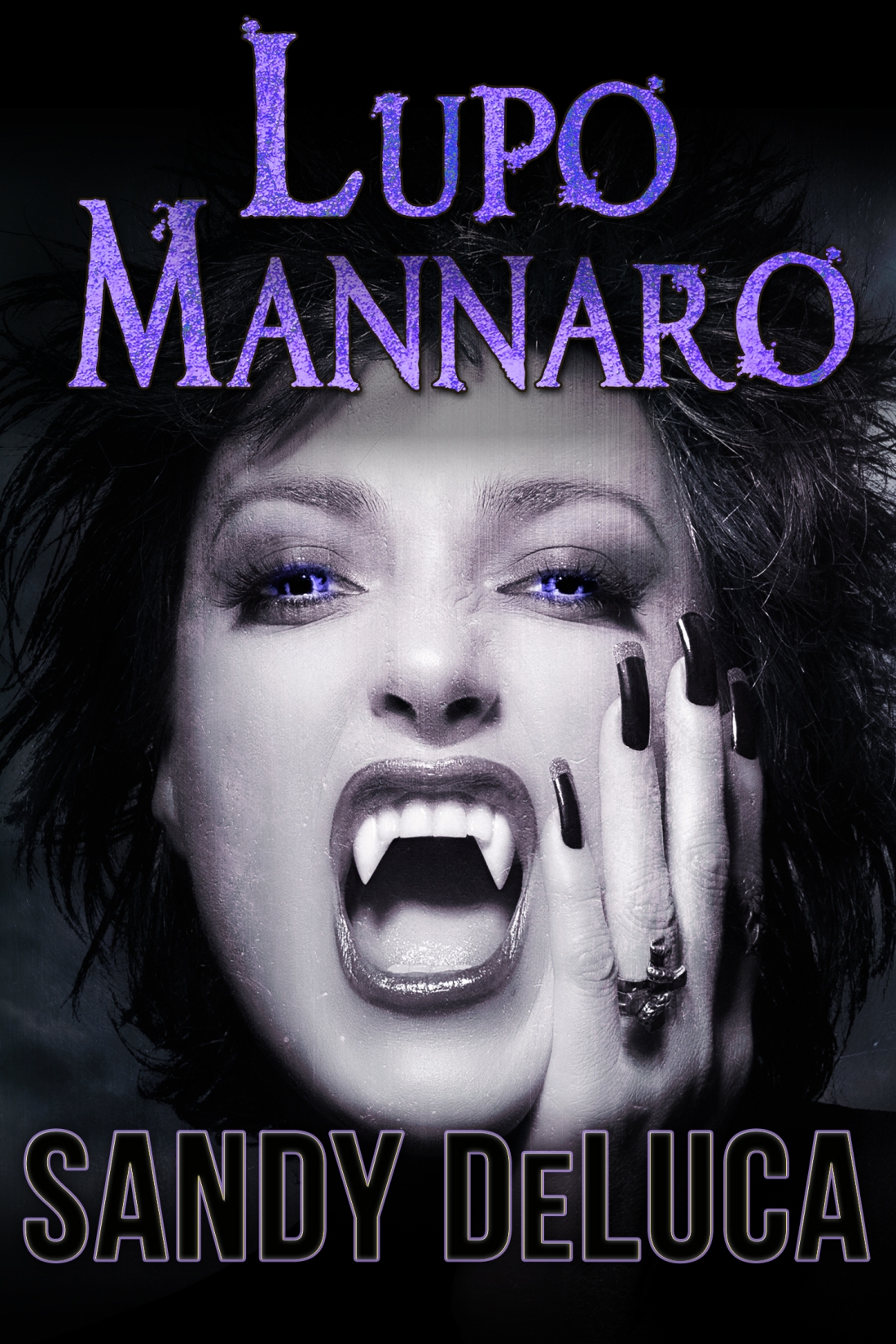 For a the full collection of my work, please go to my Amazon author page. Click the above link. 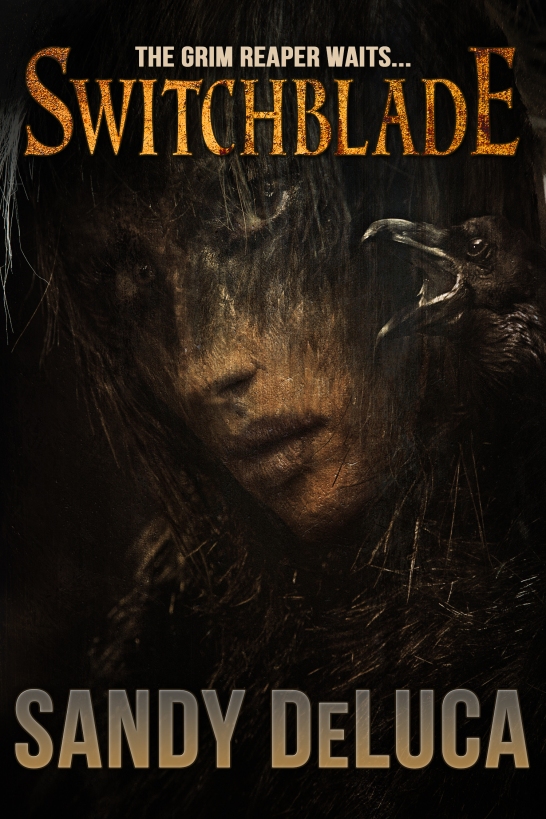 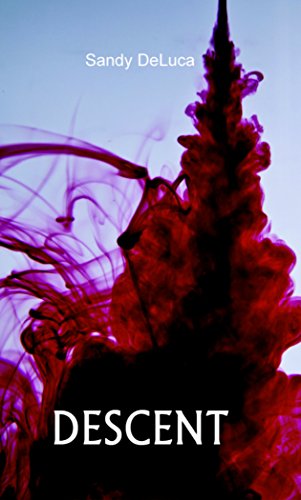 Messages From the Dead at Amazon 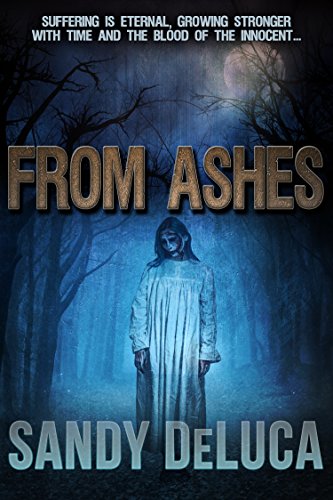 From Ashes at Amazon 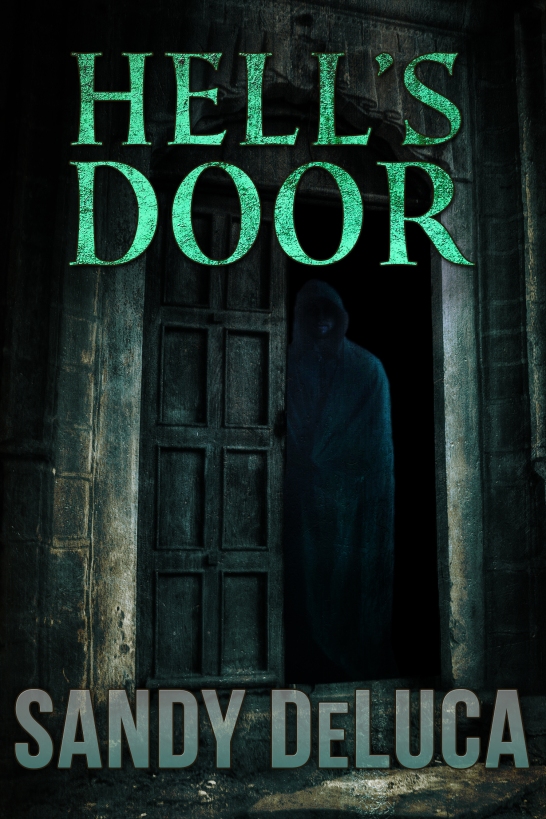 City at the Edge of the Earth at Amazon 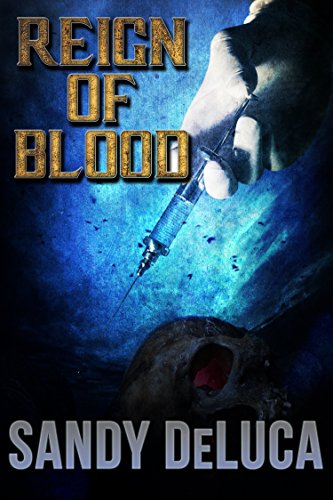 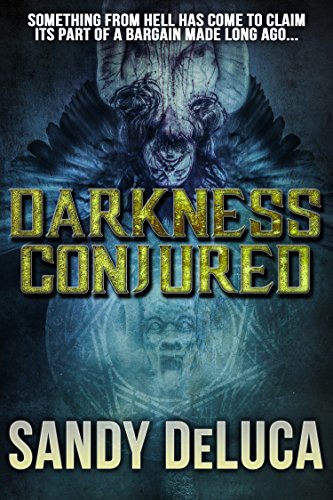 Reign of Blood at Amazon 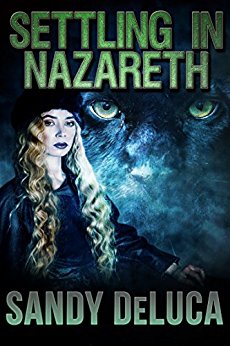 Settling in Nazareth at Amazon

Sandy DeLuca is an American author and visual artist, born in Providence, Rhode Island. As an author, she is known for dark and surreal prose; often visceral and shocking. She is best known for her work in the horror genre. She has produced critically acclaimed novels; DESCENT, MESSAGES FROM THE DEAD and MANHATTAN GRIMOIRE.

Over the past decade, much of her visual work has been related to the horror genre and her own writing. When she writes, she often sketches and paints characters and scenes inspired from her fiction.  She illustrated the award-winning poetry collection, VAMPIRES, ZOMBIES & WANTOM SOULS, with Marge Simon’s poetry. She has also painted cover art for small press publications; ALBAN LAKE PUBLISHING and NIGHT TO DAWN BOOKS.

She sold her first piece of art in 1979, when a friend exhibited her drawings on a wall in a beauty shop. A few years later, she had her first solo exhibit, while still an art student, at the CCRI art gallery. Around 1987, she began to write articles, accompanying her photographs for a string of magazines. And several years later, her art, poetry and fiction began to see publication within the zines that were  popular in 80’s and 90’s.

During that period, she launched her own publishing companies, Goddess of the Bay. Later, December Girl press, producing and editing magazines and anthologies; including horror anthos such as A Midsummer Night’s Dream and crime noir fiction such as Crime Spree. She worked with late icons like Charlee Jacob and Ed Bryant. She published work by Brian Keene, Mary San Giovanni, Greg F. Gifune and Mike Liamo. She went on to to be nominated for the Bram Stoker * for poetry award in 2000.

She lives in New England with three feisty tortoiseshell cats and an elderly tabby cat. She is an avid book collector, spending her free time reading, researching family genealogy and studying the metaphysical.

BURIAL PLOT IN SAGITTARIUS (POETRY), 2000, THIEVIN’ KITTY PUBLICATIONS (NOMINATED FOR THE BRAM STOKER FOR POETRY AWARD AND THE RHYSLING AWARD). This book was accompanied by her cover art and interior illustrations. A copy is maintained in the Harris Collection of American Poetry and Plays (Brown University) Poetry, 1976-2000.

GIRLS ON THE ROAD, POETRY, ART AND NOVEL EXCERPTS, 2020

Novelette: Journey to Talazia, with her illustrations, Alban Lake, 2017

*From 1987 through the present her short stories, poetry, articles, photographs, opinions and art have appeared in various books, magazines, print and online publications.

Gardens of the Fey, (with marge simon’s Poetry), 2013, Wolfsinger Publications

Notable anthologies which included her short stories are:

Goddess of the Bay Publications, where she produced and edited a monthly zine of poetry, art and short stories. In addition, specialty projects such as A Midsummer’s Night Terror, Something Wicked (experimental fiction collections) were produced under this banner.

December Girl Press (an imprint of Delirium Books): She produced and edited a collection of ‘Noir fiction called Crime Spree and a rare collectible novel Saying Uncle, by Greg F. Gifune. (1999 through 2003).

Resource lists that have documented some of my work.

Reviews, interviews & blurbs about my work.

The Genre 1995-ongoing. Paintings inspired by genre writings and imagined images related to my own writings. 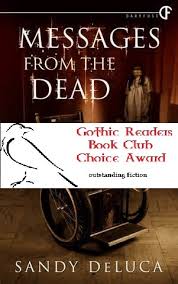 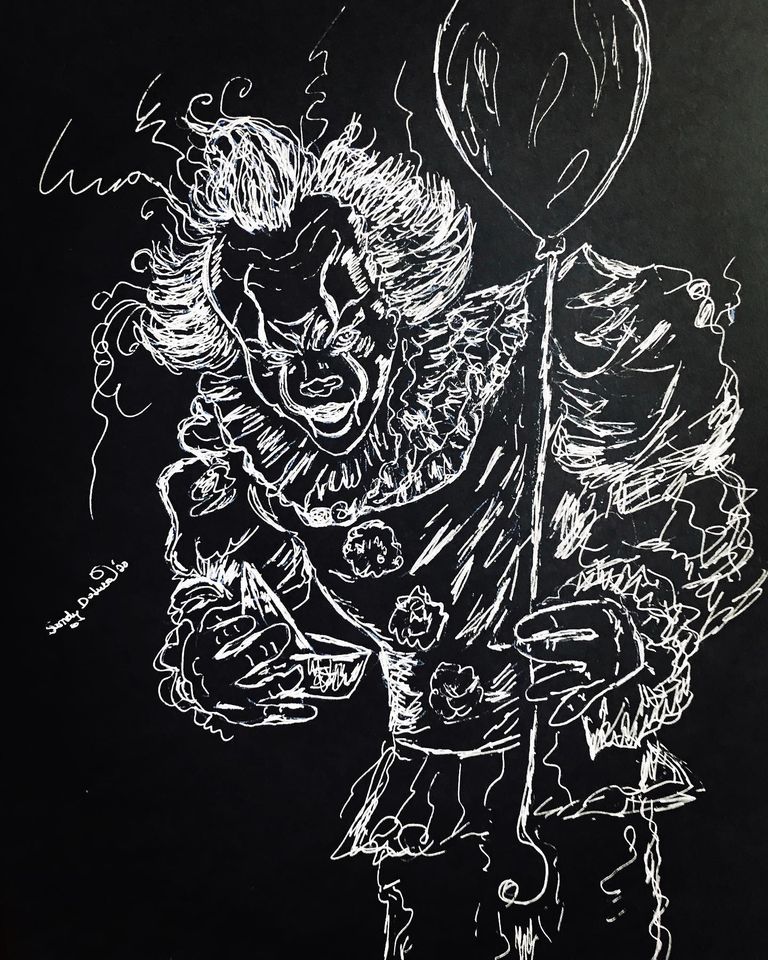 Recent paintings and drawings on paper and canvas.

My version of Harley Quinn above.

Loving DC Comics characters and revisting them this summer. Have created some of my own expressions for some of the personalities that I adore.  Fan art for your viewing pleasure.

Am also in the midst of collaborating on a new novel with a writer who I admire. Thrilled that I was asked to work on this project. In addition, I am working on several other writing projects. 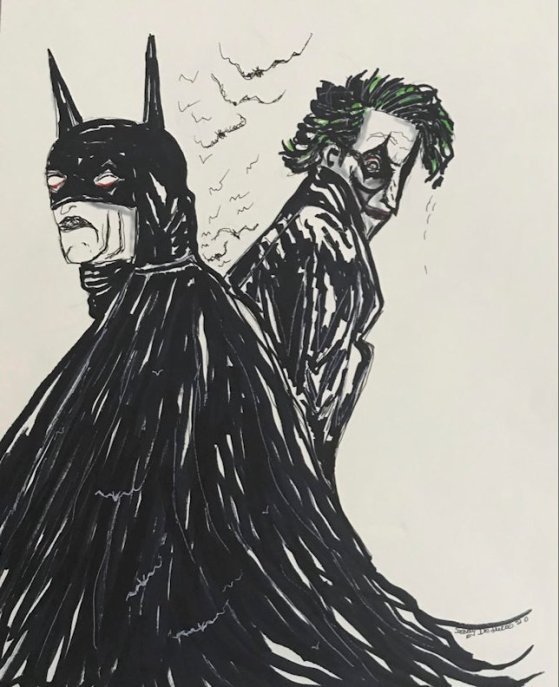 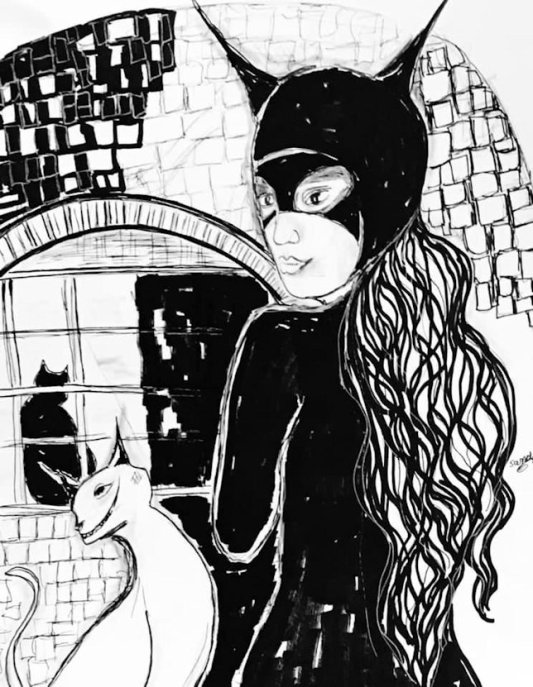 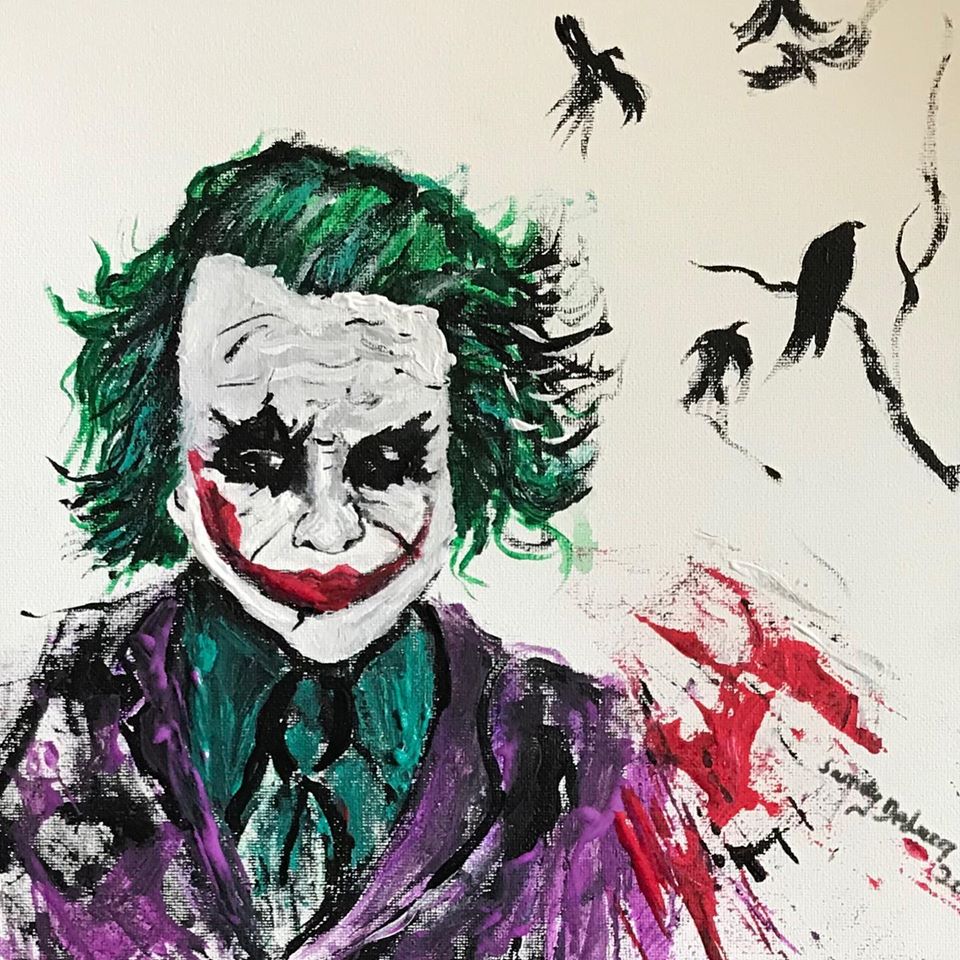 A few new pieces of art relating to my current series. They all all acrylic and ink. 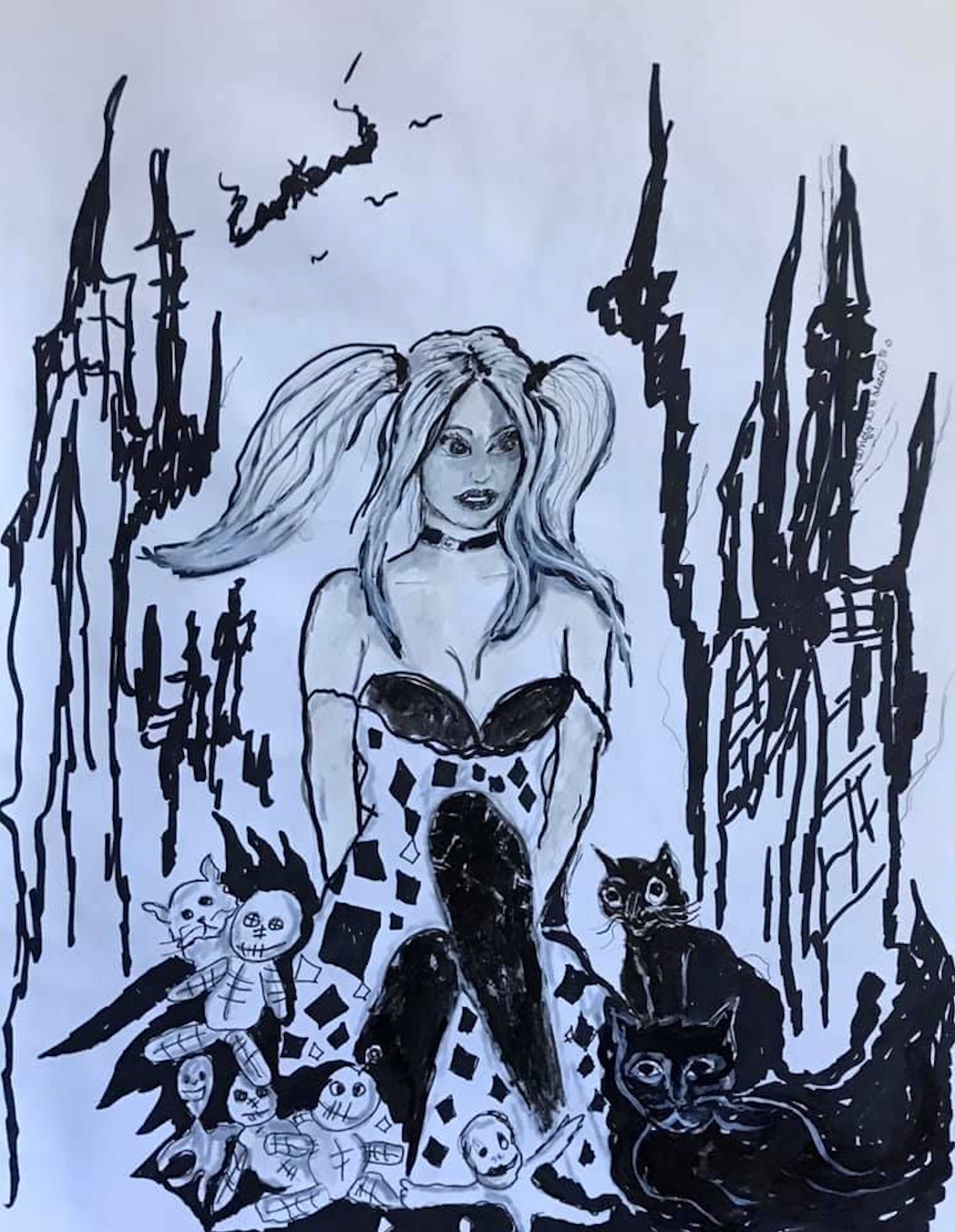 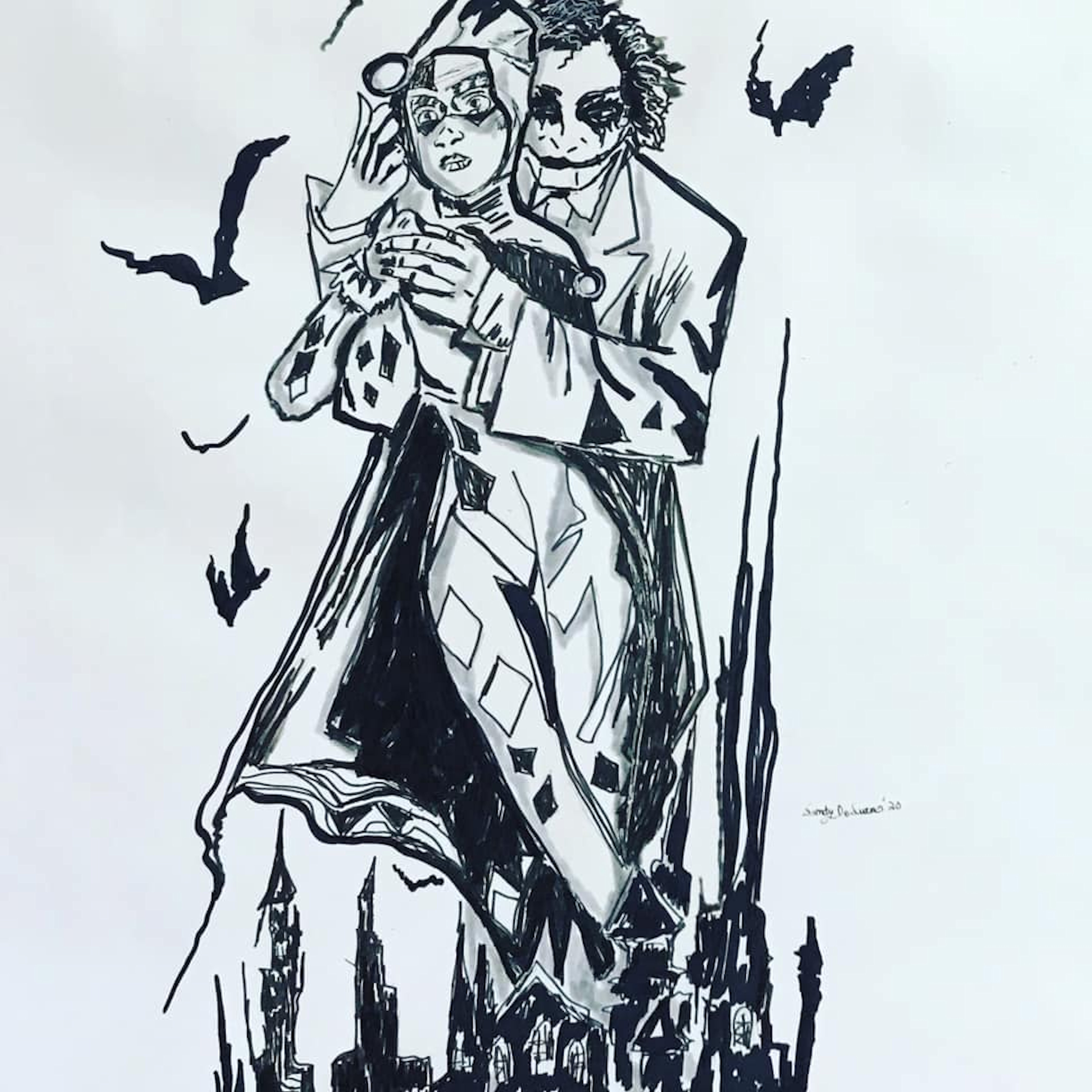 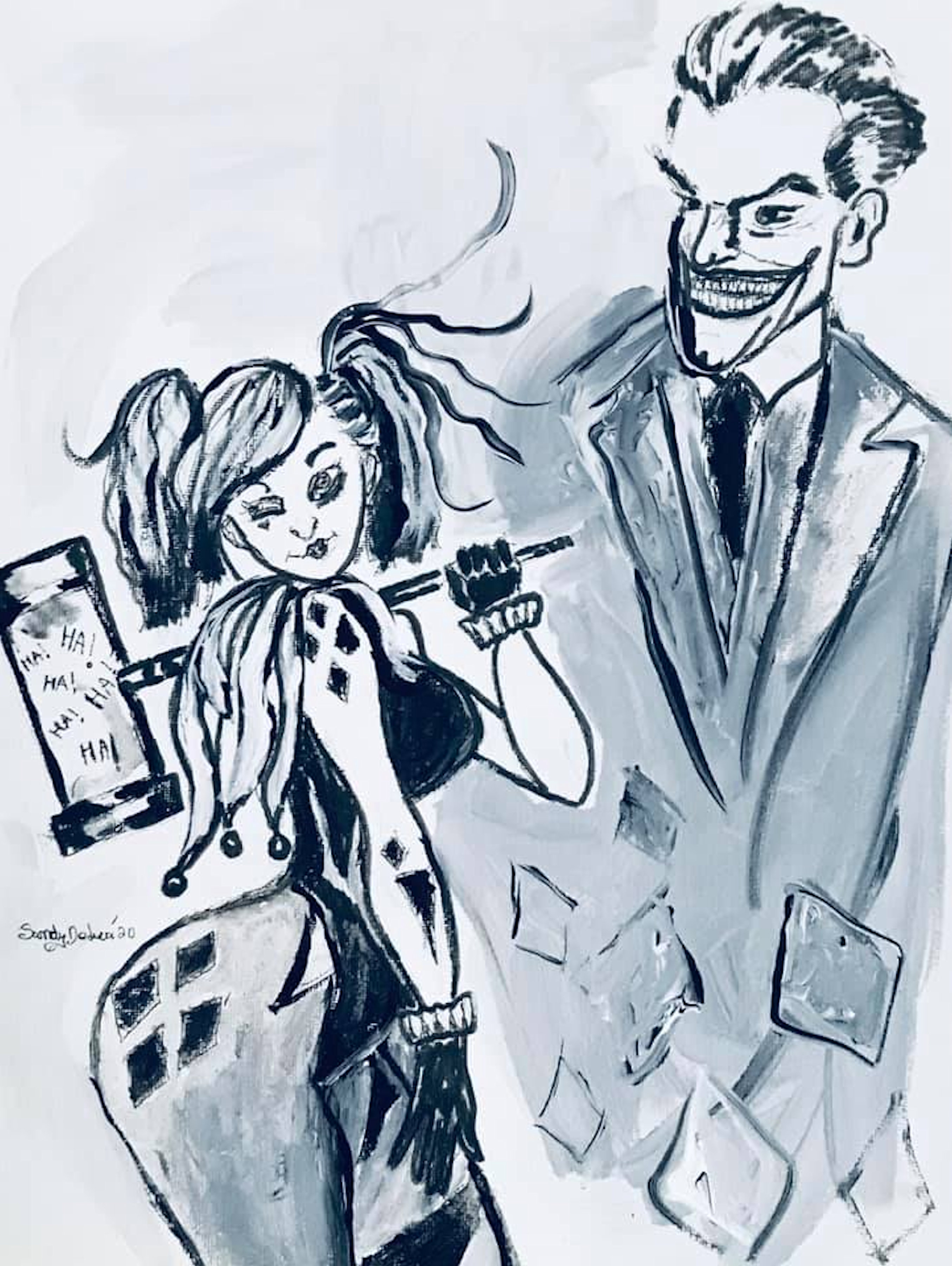 This piece is a combination of several images; an old painting done around a decade ago,  several pen and ink drawings I’ve done over the past month; and my love of comicbook art. It is called “Joker’s Ghost”.

As I paint the characters from DC Comics, I interpret them in my own way…as many other artists do. I strive to capture a suggestion of each character, while staying true to my vision as a painter. I try to remain loose, allowing the paint to drip, leaving some portions incomplete…and maybe up to the imagination. So, in no way am I  a comicbook artist.  I just love the movies, the books, the comics…the art. Stanley “Artgerm”  Lau and Frank Cho are two illustrators that I admire.They inspire me. And I just do what I do. Someone told me that what I’m doing now is Neo Pop Art. So, that’s cool. 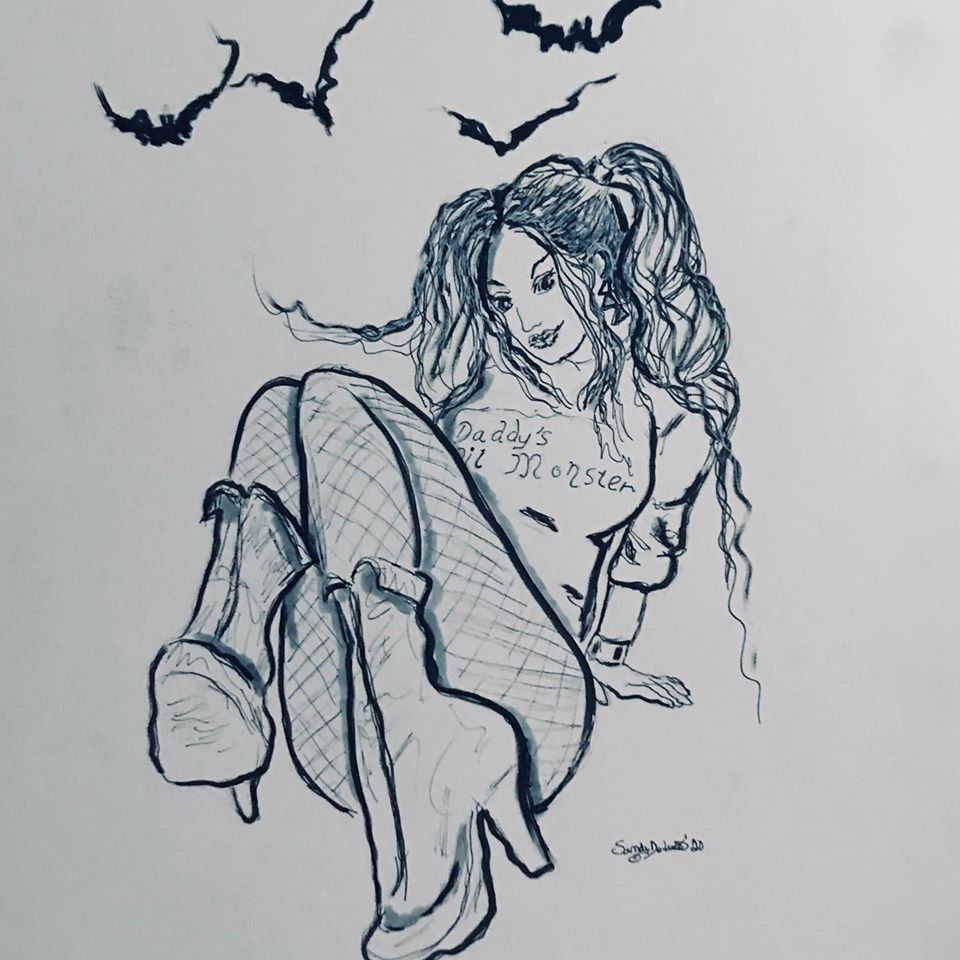 The news is disturbing these days. So, I’ve escaped to Gotham!

Researching different artist’s and their varied interepations of DC Comics characters.  Right now, the influcences of artists like Jason Fabok and Stanley ‘Artgerm’ Lau have inspired me to paint some of my own versions of the various heroes and villains of Gotham. Of course, the villains rule with me.

My work will never be as technical as the artists that I’ve mentioned–and I don’t want it to be–but I’ve incorporated my work into what might be called a Neo Pop Art style.

Right now–over the past week–I’ve been doing studies with ink and acrylics, all in black and white. Will keep you posted on my progress with time. 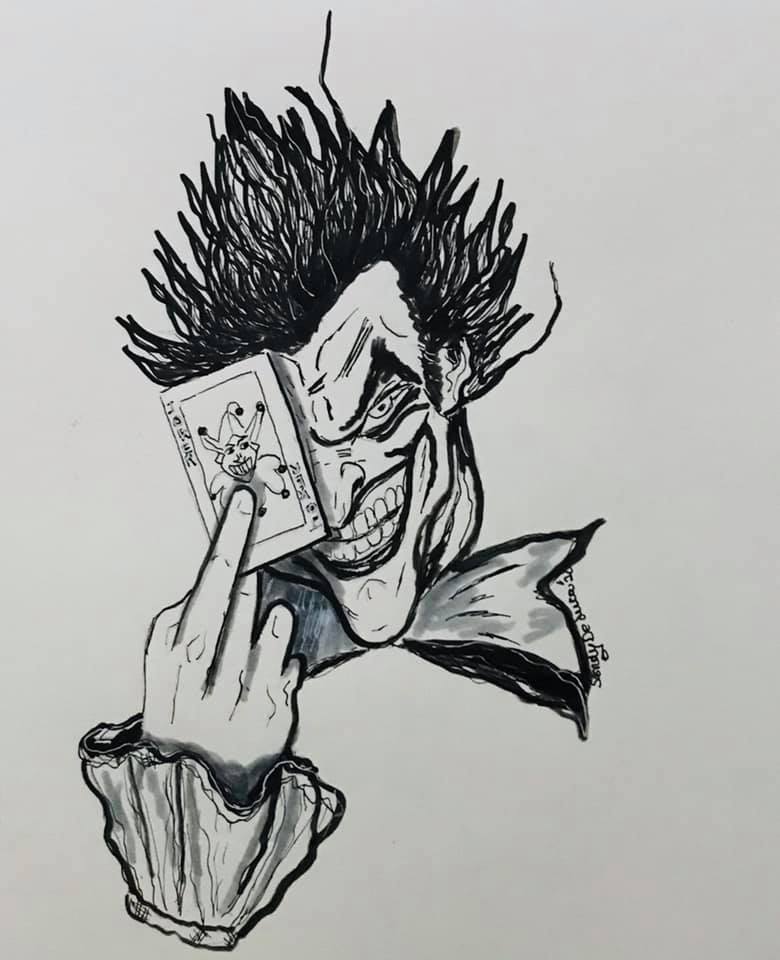 I’ve always been a fan of comicbook art. As you know, one of the first pieces of art I sold was a comicbook painting.

Recently, I’ve hauled my DC Poster books out of storage for a bit of inspiration. I’ve watcher JOKER a multitude of times; revisited THE DARK KNIGHT and viewed THE SUICIDE SQUAD.

This figurative series began in color. And then, I moved on to black, white and gray. I’m posting some of the pieces here.

As always, thanks for checking them out. 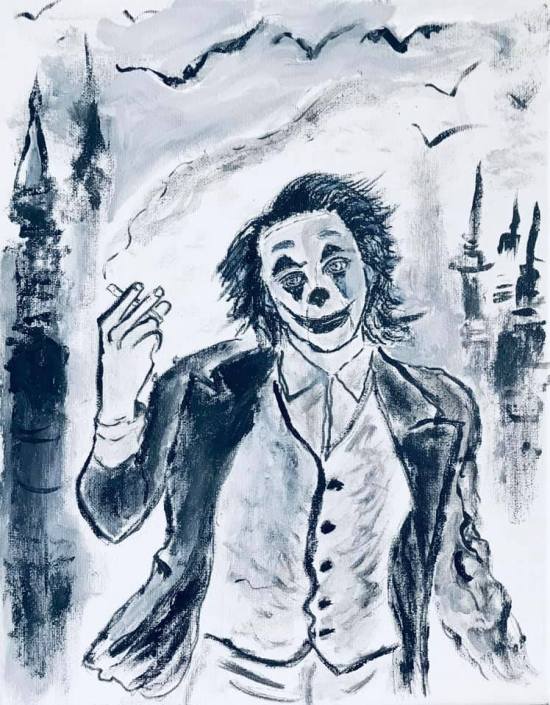