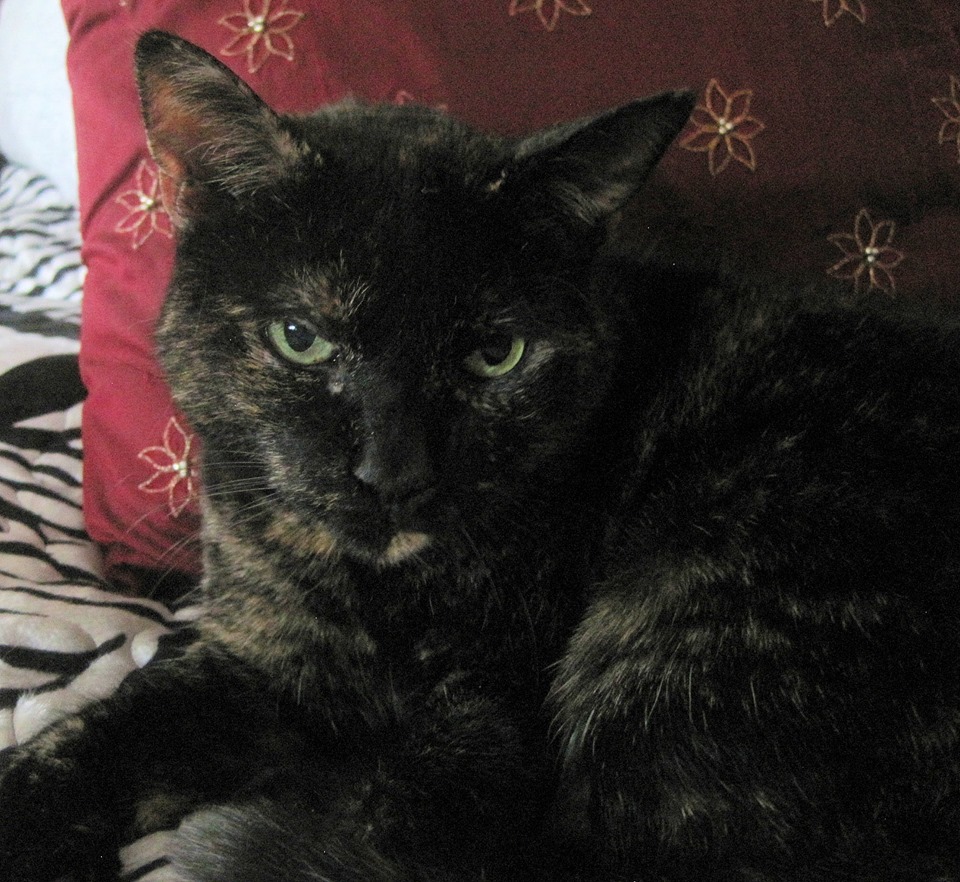 Mimi came into my life in August, six years ago, a few days after my father passed away.

I wanted a companion for my older cat, Matty. Not a kitten, but a young animal. A woman who handled adoptions for Providence Animal Shelter at Petsmart indicated that a quiet, sweet five-year-old female like Mimi would be perfect. So, I brought her home, and Matty immediately let her know who was boss, but eventually he gave in to her cuddling and sharing cans of his favorite food.

Matty passed away six months after Mimi came to live with me. Afterward, she became closer to me, my little buddy, leading the way as I made my way down staircases, greeting me at the door whenever I returned home, sleeping beside me at night.

Through the years, more cats joined my household, but Mimi was always a tiny soulmate, sitting beside me when I didn’t feel well, gently giving me kitty kisses, purring loud…loving with all her might. She was the boss, strutting around like a true queen.

She was a friendly girl, always joining in when I had parties, chasing the larger boy cats up the stairs, sleeping atop newspapers I placed on the floor when I painted, and sitting with me when I wrote. She gave me so much love and companionship.

Two weeks ago, she began to have trouble eating, struggling to munch on the dry food that she loved, and barely eating the breakfast of canned food that I offered her. I suspected that she had a sore tooth and made an appointment with her veterinarian. The doctor found a growth in her mouth, warning me that it could be cancerous. She suggested a biopsy, and I asked if it could be done the following day. She complied and we went ahead with the procedure. They also found a loose tooth beside the mass and I told myself that the so-called tumor surely was a result of Mimi’s dental issue.

She was sore for a few days after her hospital visit and she dined on soft food and lots of gravy. However, on the third day—Friday–it became increasingly more difficult for her to eat. I booked another appointment with the veterinarian.  Mimi was given Subcutaneous fluids and Mirtazapine, which stimulated her appetite. Once back home, I opened several cans of food, poured gravy over everything, waiting for her to decide which dish was her favorite, and then patiently helped her to eat. When she got tired and retreated under a bed, I crawled under the bed and offered her more, and slowly—most likely painfully—she ate.  And I assured myself once more that the mass was merely a result of her dental problems—that had to be it. Everything would be fine.

My youngest cat, Reese, began to watch over the feedings, looking on with apparent concern in her eyes. Mimi was her mentor, teaching her to chase the boys, possessing the same tortoise shell fur. And the young cat kept watch. Then she escorted me down the staircase once Mimi had been cared for.

On Monday, we repeated the feeding ritual. Mimi would lick up what she could, grow tired of it, and I’d follow her, offering her more food, and she’d accept slowly…obviously in discomfort. And Reese looked on, never interfering, always ready to walk beside me once I’d finished.

Tuesday was the same, and Mimi seemed better…but still not herself. The phone call came that afternoon. Mimi’s doctor told me that my beloved cat had squamous cell carcinoma and that it was not operable. I asked, “How long?” And she told me, “A month…maybe two.” Then, she went on to explain the stages of Mimi’s illness. She eventually wouldn’t be able to eat at all, her tongue would hang out, she’d grow weaker and weaker.

I researched the disease, hoping to find a way to cure her, to prove the prognosis wrong. But, it was always the same. Operating inside a feline’s mouth was sometimes done—not often though—and radiation and chemotherapy only helped extend life a few more months.

I would have gladly gone into debt if I could have found a way to cure her, but there was no way she would survive. And if her life was prolonged with surgery and treatment, it would be for a short and painful time.

On Wednesday, I continued tempting her with food, and it grew more and difficult for her throughout the day. Someone suggested giving her soft treats, that they had worked for a cat with a similar condition. I cut those treats into tiny pieces. Mimi wanted them so badly, but couldn’t grasp them with her mouth. That broke my heart.

She began to hide beneath a bureau in a vacant upstairs bedroom, peeking her head out to lap up what food she could. I saw her pain, and I contemplated calling her doctor, to ask to have Mimi euthanized, but I waited.

The following morning, I awakened at 2 in the morning, found her sitting in the living room, alone—not nuzzled in her normal place on my bed. She looked up at me with knowing eyes—clear and not glazed over with the hell of her disease. It was as though she’d escaped to another place, visiting the beauty and freedom there. And she was telling me, “I’m tired now. And I want to be in this beautiful place.” At that moment, I knew what was right for her—but later I dismissed it as nighttime sleepiness.

Later, when the sun rose, she ate very little and hid under that bureau. I thought about the weeks ahead of her. Days and hours that I would have with her…as she struggled to eat—while she struggled with pain.

I had a chat with her doctor and she told me that the decision was mine, that some people wait just to have more time with their pets. She also said that if she were me, she’d probably be at the same point regarding a terminally ill animal. So, we went ahead and helped Mimi go to the Rainbow Bridge.

She died peacefully—and I wept.

Later, I sat on my living room couch, tears streaming down my face, and Reese jumped into my lap, allowing those tears to fall onto her back, dapple her fur, never complaining. And for the first time that night, she snuggled beside me while I slept.

Despite the love and companionship of my other felines, I’ve been crying since Mimi left me, sometimes asking myself if I did the right thing—if I stole part of her life. But she was dying, slowly and painfully, and it would have been inhumane to keep her here. I think it was the right thing to do—I hope.

She loved to run and play when she was well, scampering from one end of the house to the other. And I can see her now, running through grassy fields, glorious, healthy and beautiful. I miss her, but know she’s no longer in pain…she’s in a better place.

Sandy DeLuca is an American author and visual artist, born in Providence, Rhode Island. Her art has been exhibited throughout New England and in New York’s Hudson Valley. Her small collages have been exhibited and sold in France, Asia, Italy, Spain, Canada and throughout the United States. She sold her first drawing in 1979 when her work was exhibited in a friend’s beauty salon. She was awarded a solo art show while still a student at CCRI in 1986. She also won an award for Most Original Use of Mixed Media. Two of her paintings were chosen to hang in the reception area of the college’s president in 1987. Since then her artwork has been featured as cover art and interior art for various publications, including notable books such as the Bram Stoker © winner, VAMPIRES, ZOMBIES AND WANTON SOULS, for Marge Simon’s poetry. Sandy has written and published numerous novels, several poetry and fiction collections, an art chapbook and several novellas, including the critically acclaimed novel “Descent” and “Messages from the Dead” (winning the Gothic Readers’ Choice Award). As an author she is known for dark and surreal prose; often visceral and shocking. She is best known for her work in the horror genre. However, she has written noir fiction, fantasy, urban fantasy and mainstream fiction as well. In addition, in the 1980s she was a photographer and writer for a string of sports magazines. She was a finalist for the BRAM STOKER © for poetry award in 2001, with BURIAL PLOT IN SAGITTARIUS; accompanied by her cover art and interior illustrations. A copy is maintained in the Harris Collection of American Poetry and Plays (Brown University) Poetry, 1976-2000. She was also nominated once more in 2014, with Marge Simon, for DANGEROUS DREAMS. She has owned and operated several publishing companies; in the 1990’s GODDESS OF THE BAY produced several monthly fanzines; and she went on to produce novels, novellas and collections from dark literature’s finest authors (including Brain Keene, Mary SanGiovanni and Greg F. Gifune). She retired from her day job several years ago and now spends her days making art and writing. At present, she is focusing on completing two novels in progress. She lives in New England with three feisty tortoiseshell cats and an elderly tabby cat. She is an avid book collector, spending her free time reading, researching family genealogy and studying the metaphysical. View all posts by Sandy DeLuca